Financing is one of the most key issues for global climate co-operation. Climate finance as an increasing part of development issues is particularly relevant to Africa as the least developed continent which is most vulnerable to the impact of global climate change. Africa needs sufficient financing to secure a low carbon and sustainable development path as well as adapting to potential damages of climate change. The reality is far from satisfactory, however, in the size, source and distribution of climate finance for Africa. China has become the second largest economy as well as the largest energy consumer and greenhouse gas emitter in the world. It is now a systematically important country in almost every aspect including in tackling climate change, in which Africa has great interest. However, China does not seem ready to lead the world in climate finance except leading by example. It is not willing to give up its position on the principle of common but differentiated responsibilities. It is increasing financial, institutional and intellectual contributions to multi-lateral institutions for climate action, but insists on South-South co-operation as complementary to traditional North-South co-operation (Ministry of Foreign Affairs, 2013).The more flexible bi-lateral channel is expected to continue to be the main platform that China can contribute to Africa’s climate finance through public assistance as well as trade and investment. China is the largest trade partner of Africa and one of the largest sources of foreign direct investment (FDI) for Africa. The China-Africa relationship has been evolving from a traditional political friendship to a modern style of comprehensive and strategic partnership. With its own domestic economic transformation, China can help promote more sustainable development in Africa. 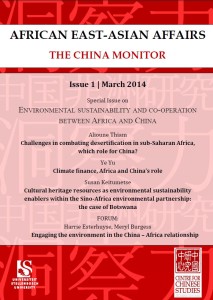 Published
2014-04-04
Issue
No. 1 (2014): ENVIRONMENTAL SUSTAINABILITY AND CO-OPERATION BETWEEN AFRICA AND CHINA
Section
Articles
Authors who publish with this journal agree to the following terms: